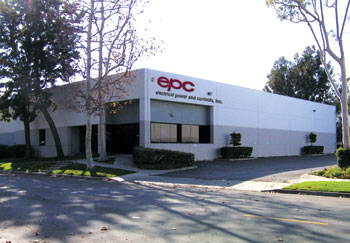 Electrical Power and Controls, Inc. is a subsidiary of Control Switches, Inc., which had its beginnings in 1955, when the partnership of Ashe-Armstrong Company was formed in Los Angeles. Ashe-Armstrong had a specific niche market for electrical and mechanical components, marketing to the aerospace industry and military facilities in the Western United States.

Adapting to its market, the partnership dissolved in 1957, and Control Switches, Inc., a California company, was formed. CSI purchased the assets and product lines of the original partnership and invited the participation of more stockholders. Its new product lines helped the company expand its market to the growing industrial sector.

EPC Is First Subsidiary
In 1974, Electrical Power and Controls, Inc. (EPC) was formed as a wholly owned subsidiary of Control Switches, Inc. EPC was created to be a stocking distributor of electrical and electronic components manufactured by domestic and foreign companies. Shares in the subsidiary were issued, and sales and management people joined the EPC staff. EPC purchased a large parts inventory to augment CSI’s line and began to address markets located primarily in Arizona, California and Nevada. At the same time, CSI became a holding company for the purpose of future acquisitions and company startups.

CSII Subsidiary Formed
In 1977, management and stockholders approved the incorporation of a new company, to promote and distribute components throughout North and South America. Called Control Switches, International, Inc., the new entity’s immediate emphasis would be within the territorial United States, with gradual geographical expansion. Its products became high quality devices from respected manufacturers who desired a reliable and knowledgeable sales organization to manage and distribute their products nationally.

CSII’s management concentrated on locating products from off shore sources, primarily European, that manufacture electrical power equipment products (such as switches, circuit breakers, motor controls, etc.) that are compatible with each other.

In 1980, D. J. ("Jack") Armstrong, one of the founders of Control Switches, Inc., purchased the outstanding stock of the other investors and assumed control of the organization.

Expansion to Value Added Facility
In 1992, a "value added" facility was established in order to supply customers’ needs from electrical products carried in inventory by both EPC and CSII. Approved for UL508 assembly, this department undergoes regular UL inspections. Its operation includes switches wired to terminal blocks and mounted in all types of Nema enclosures, sectional terminal blocks assembled on din rail and mounted in enclosures; and contactors and relays designed into panels. Small control panels not requiring a high degree of engineering and other similar equipment are supplied by EPC and CSII separately.

In addition to an extensive product inventory line for the power electrical industry, EPC provides engineering support and knowledgeable sales personnel who help with overall design and application issues. Their technical expertise makes it possible to custom-design and build switches and other products for clients.

More Expansion Occurred in 1997
In 1997, the company expanded by purchasing an additional 10,000 square foot building adjacent to its existing 11,000 square foot facility at 2405 Mira Mar Avenue in Long Beach, California. By this time, its staff had reached 30 employees for both the CSII and EPC subsidiaries.

A loyal staff has contributed significantly to the success of the CSI companies and includes several employees with ten to more than twenty years of service.

EPC At Your Service
EPC is happy to address your special design and product needs.